This plate is contained in a book which compiled the international and local events that happened between the two half-yearly trade fairs in Frankfurt. These Relationes are a kind of early journals or periodicals. The plate compiles news of the comet C/1664 W1 from several comet broadsheets that appeared around that time. These sources can be identified easily. Two examples are shown below.


The text in the book says (translated into modern English):
"New comet-star seen -- At the end of the 1664th year a very new and --according to many opionions-- a very special comet-star was seen everywhere before dawn. It did not look the same in different places where it was observed. It turned its tail sometimes to the east and sometimes to the west as well. It is said to be similar in size to the comet seen in 1618. In Hungary [...] and many other places he showed its tail and this is why the Turkish sent people out to ask what it would mean. Elder people said that some and 40 years ago [...] a similar star was seen. In Hmburg the star rose at five o'clock in the morning in the south-east and stayed there until seven. The tail, which was three Brabantian cubits long was pointed to the south-west. In Genua and everywhere in Italy it was seen as a bright shining sphere. [...] its tail was more than 336 German miles long. It did not cause plague because it was situated in the mouth of the whale-fish which is a watery sign. But it says bloody war. But others also said it was a good sign."


The inscription says Also seen anno 1618. This comet image resembles closely the comet of C/1618 W1 as depicted in Merian's Theatrum Europaeum of 1662 (second image below). 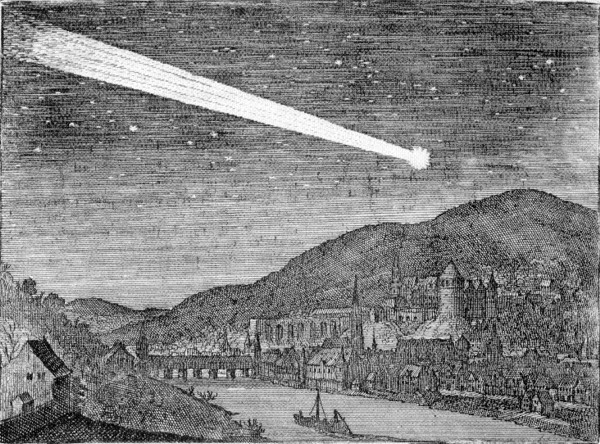 This insert shows the comet as it was seen from Nuremberg and Augsburg on Dec 24, 1664, and . Both images are definitely influenced by several broadheets as shown below.

If you have any questions, please email me (maik@comethunter.de).